This is yet another drugstore review by Maybelline. I've always wanted to try out different colours other than neutrals so, I decided to pick this quint in Pink Punch. Going for pinks is risky because if it's not the correct shade of pink it could make your eyes look like they swelled up. Yikes !

Colour / Pigmentation: I was happy that when I applied the shadow on my eyes, it did not look like my eyes swelled up. The colours are not very pigmented. If you want to use this quint make sure you use primer over your eyes first !! As you can see I made swatches. The first one is without primer and the second one is with primer. 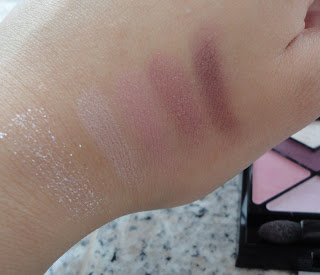 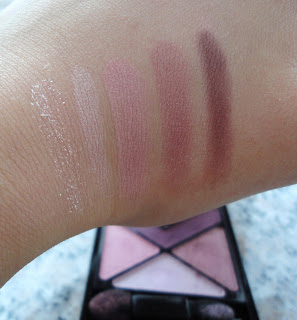 It made a dramatic difference eh? Also, another reason why you would want to apply primer is because every single shadow has shimmers in it.

Packaging: Not a fan of their packaging... especially the darkest purple shade. It's very hard to get the brush in there and get product out. Comon' why did you have to design it so that it's in a skinny V - shape =.=" ?!

Texture: The shadows are very soft with the exception of the silvery glitter one. That shade is very gritty because of the large glitters.

Overall: 2/5 This is a good quint if you like soft light pinks and glitters, if you don't, stay away from this quint !!
Posted by JayEle at 12:36